Read the article directly from The New Bedford Light here.

When the late Roger Mandle and his wife Gayle founded DATMA, the exhibit “Water 2021” was just the kind of cutting-edge installation Roger had in mind for New Bedford.

He wanted a contemporary museum that didn’t collect old stuff; but rather one that would bring art and design from new technologies and materials to New Bedford, and in turn take the world of New Bedford to new places.

This summer, the internationally known Swiss artist Zimoun’s architectural installation for DATMA’s “Water 2021” is happening in New Bedford. It is a long, curved wall of cardboard boxes with attached cotton balls, propelled by small motors, bouncing off the boxes in unison. It happens in one of the UMass Star Store’s galleries in the downtown, visible easily through the big windows looking out on the corner of Union and Purchase streets.

Now that COVID-19 restrictions have lessened, the work is also much more visible and much more audible inside the downtown campus’ actual corner gallery.

Of the piece, the curators wrote “Seemingly chaotic, repetitive motions are contrasted by the enveloping sounds emitted by the artwork, simulating a soft rain or the sound of running water.”

Indoors, the installation is louder than soft rain, more like the heavy pounding rain of a thunderstorm. It’s also a bit like the hum of the ocean if the crashing waves were much quicker and more regular. Maybe it’s most like the steady drone of a scallop boat engine pushing up against the background hum of those waves.

It’s a rhythmic little roar that transports you to somewhere else in your mind. The exhibit label describes it as an exploration of the juxtaposition of the simple and the complex, the manufactured and the organic.

“It is so unusual, imaginative and out-of-the box. We were hoping that would inspire people …  to think outside of the norms of art, to push them, to challenge people’s perceptions of what art can be,” said Lindsay Mis, executive director of DATMA (the Massachusetts Design, Art and Technology Institute).

As commanding and thought-provoking a work as Zimoun’s will remain in New Bedford all summer, until Oct. 17.

Now in its third year, DATMA previously installed “Summer Winds 2019,” which included “Silver Currents,” an exhibition of shimmering film in Custom House Park, and last year “Light 2020,” which splashed light shows up and down Union.

Harvesters of the Deep

With the spike to downtown businesses of last year’s installation, this year DATMA is up and down Union again, and over on MacArthur Drive, between the State Pier and the Black Whale.

Besides Zimoun, there are two other “Water 2021” exhibits that prompt New Bedford to think of itself differently. A lot differently.

In the case of “Harvesters of the Deep,” the invisible is made visible. Did you know that most of the workers in seafood processing houses are women? They are. Even though you’ve probably never seen a formal portrait of a woman as a seafood house laborer. 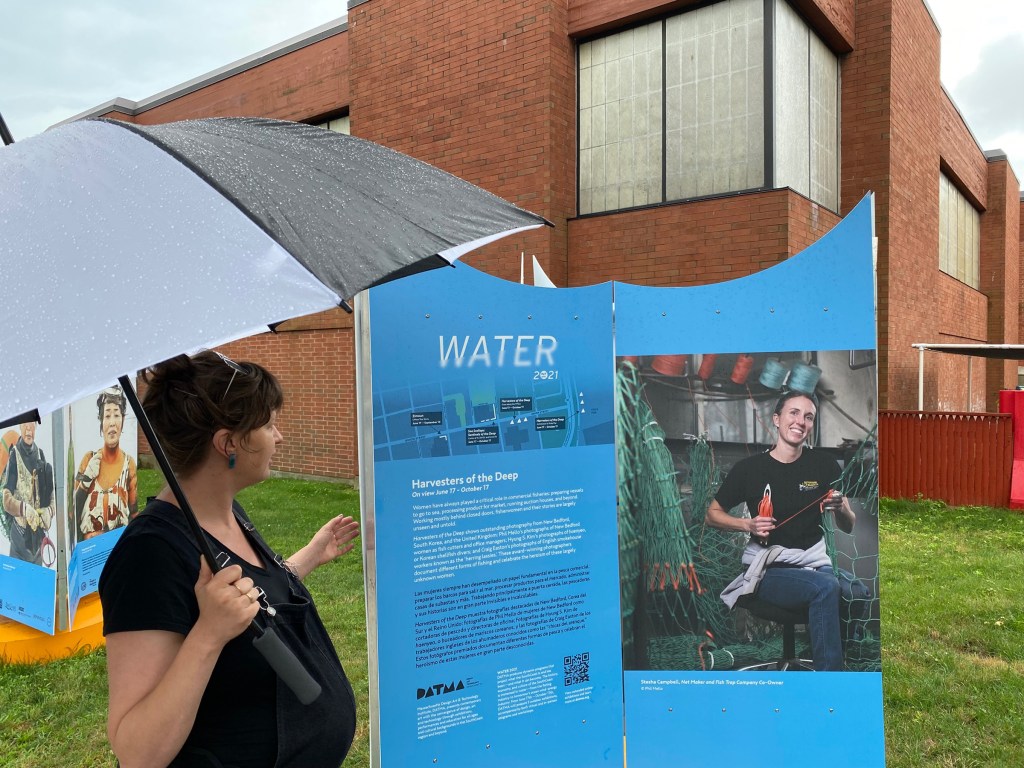 DATMA Executive Director Lindsay Mis talks about the “Harvesters of the Deep” display on Union Street. Photo by Jack Spillane